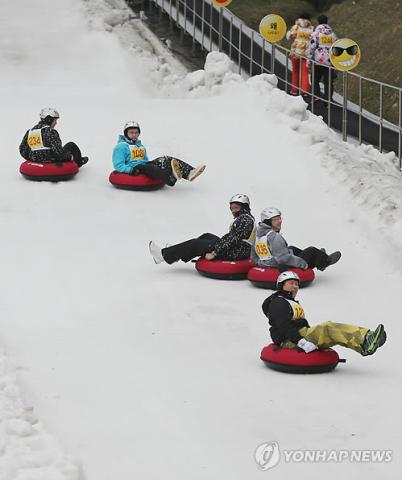 When talking about “April Snow”, most of people;  especially Korean people will think about the “April Snow” as a popular box office Korean movie in 2005 led by Bae Yong Joon and Son Ye Jin; the story about the weird adulterated love affair of husband and wife of others

The tourists will enjoy 2 seasons at the same time at Yongpyeong Resort; the beauty of Cherry Blossom with mild weather in spring season, and the atmosphere of winter season when people will be surprised with long range of sledge slope covered by real snow and some by snow machine, and being contrast with warmer weather and green grass nearby covering with the flurry of “Pot Got” or Korean word for “Cherry Blossom”

“April Snow Festival” was initiated by KTO, Bangkok Office and materialized by the Yongpyeong Ski Resort as the pilot project in 2012, in order to give a chance for Thai outbound tourists who missed the snow and ski during the winter in Korea, and to have the last chance to experience and enjoy the snow with snow sledge competition among the participants during one night and two days event. The competitors will contest by sliding their sledges and try to grab the mascot on the snow track. The winner will be awarded by that mascot and also special prize during the Gala dinner with entertaining programs. Among the participants, nearly half of them are young children who are surely entertained and very much satisfied with the all programs of the festival.

The organizer of this event will never miss to put up the Buddha Image in the area of arrival hall of the participants as all of Thai participants will not miss the most important ritual procession of Songkran (Thai New Year) by bathing the Buddha Image for bringing them good luck charms for the rest of the year. This year “April Snow Festival” was held during April 13-15, 2016., and participated by more than 700 Thai tourists. The most enjoyable part is when they were sliding the sledge down the hill and competing to grab the mascots on the snow field to become the winner of competing event in each round.

Since this event have been successful for Thailand’s market for 5 year consecutively, it is surely that this event will be introduced to other ASEAN market for promoting Korean very last snow and winter for the tropical tourist to experience winter sports, or at least to encourage and stimulate them for the participation in the upcoming Pyeongchang 2018, the Winter Olympic Games to be held in Korea for the first time in the next 3 years, and who knows there may be winter sport athletes such as snow skiing and ice skating categories from ASEAN countries as same as some Korean world ranking golfers have been trained and practiced in many famous golf course Thailand for the whole year period before.

From City (many lines and shuttle bus, please check: https://www.yongpyong.co.kr/eng/about/bustShuttle.do)

The War Memorial of Korea (전쟁기념관)