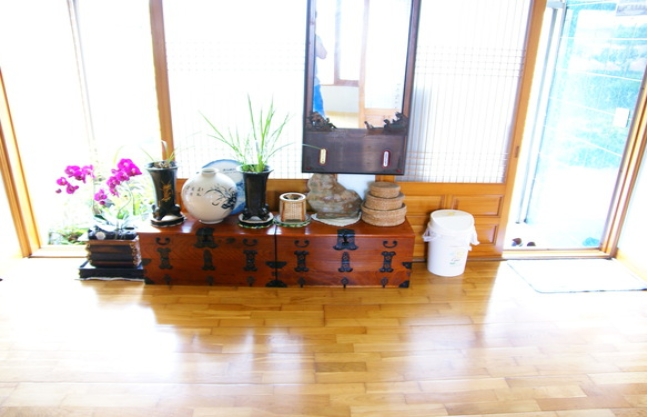 Ohgimok Grandma House is located near the parking lot of Seongsan Ilchulbong.
The crater of Sunrise Peak consists of 99 rock peaks along its rim that look as if they are escorting the crater and forming a castle. For that reason, the basin was considered to be holy, and itwas named “Seongsan” which literally means holy mountain. The view of the sunrise here is truly remarkable.

Summary
The first Jeju Olle Trail route opened in September, with U-do(island) and many picturesque farms will 2007. Walkers can experience views of the magnificent catch your eye. The route continues along the salt sea and unique Oreum(small inactive volcano) fields in Jongdal-ri to the coastline in Siheung-ri.
on the route. Depart from the beautiful ‘Siheung When walkers reach Sumapo Beach, the Seongsan Elementary School’ and climb up Malmi Oreum Ilchulbong appears once again. The color of the sea
and Al Oreum. At the top of the volcanoes you’ll be at Gwangchigi Beach (the end point of Route 1) can see Seongsan Ilchulbong (Sunrise peak), along truly unforgettable.

Al Oreum
“Al” means an egg in Korean and this Oreum looks just like an egg. It is next to Malmi Oreum and has spectacular views of fields, Seongsan Ilchulbong and U-do (island). There is a livestock farm on Al Oreum and once can encounter horses and families of roe deer.

Seongsan Ilchulbong
It is located at the end of the Seongsan peninsula. There is a huge crater at the top of Seongsan Ilchulbong. The crater is about 600 meters in diameter and 90 meters deep. With 99 sharp rocks surrounding the crater, it looks like a gigantic castle.
While the southeast and north sides are cliffs, the northwest side is a verdant grassy hill that is connected to Seongsan Village. It’s a great place to watch the sun rise.

The Salt Fields of Jongdal-ri
In past times, when agricultural conditions were harsh, Siheung Elementary School ⓒ Kim, Jin-seok the local people would make salt for a living. Women would carry salt on their backs and walk all night over Mt.Halla-san to sell the salt at Jeju-si market and Moseulpo market. Now much of the salt has disappeared and beautiful reeds have taken over the salt fields.
There is a big hackberry tree near the salt fields that gives shade for those hikers who wish to take a rest.

Jongdal-ri Beach
It may be a small beach, but the color of the sea is a brilliant emerald green that will leave you gasping at its beauty. Jongdal-ri beach is hoem to different seaweeds and shellfish (this area is famous for its delicious seafood). The beach has shower facilities for bathers.

Sumapo Beach
This is the site where horses for governmental use were raised back in the old days. They were moved to the Seongsan Port first before shipped to the mainland. The remnants of 23 caves the Japanese army dug up during their defensive near the end of World War II remain as a scar along the beach.