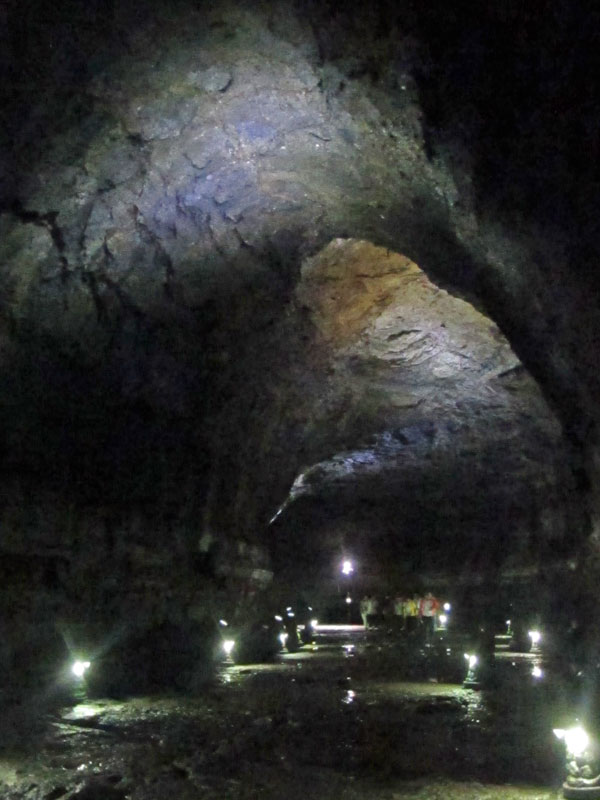 Imaging Your Own Rocks and Stones in Manjanggul Cave

If any has a chance to visit Korea and want to experience the atmosphere of the cave that is different from the other cave, Manjanggul Cave is the recommended one. It is also a “must visit” site in Korea as you will enjoy whimsical wonder of the nature in this cave.

It is said that Manjanggul Cave is one of the best lava tunnels of the world, and is designated as the UNESCO World Heritage site, together as the Natural Monument No.98 of Korea. As same as Jeju Island which is created by a massive eruption about two million years ago, Manjangul Cave is the lava tunnels being formed by the lava that was deep in the ground spurting from the peak and flows to the surface. The total length of the snake-like tunnel is more than 13 kilometers which is also the longest lave tube in Asia, but only 1 Km. is opened for the tourists.

Inside the tunnel, there are various interesting structures types of lava formations inside that can be imagined as animals look alike, including “Stone Turtle” which is especially one of the eye-catching for visitors. Some said it was shaped like Jejudo Island.

Apart from being interesting natural place, the Manjanggul Lava Tube has various kinds of living creatures, including cave-spider, and ten thousands of bats living inside it.

Manjangul Cave is located at Manjanggul-gil, Jeju-si, Jeju-do provice. The operation hours is 9.00 to 18.00 hrs (last admission is 17.10 hrs.).It is closed on the first Wednesday of every month. The duration of tour by to and fro trip inside the cave approximately around 50-60 minutes as it is “cul-de-suc” route. The admission fees are from 800 to 2,000 wons(upon the ages and types of group or individual).
If you have opportunity to travel to Jeju, do not miss to visit this place as you may create your own creatures from the lava formation rock inside by your own imagination.