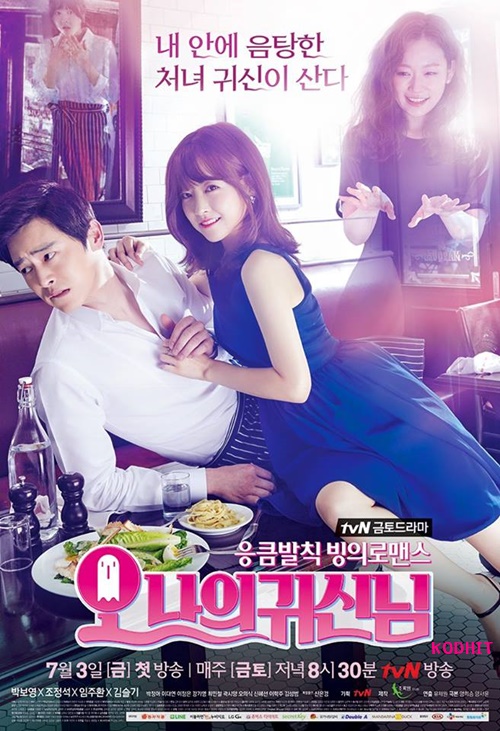 Are you looking for a good and famous Korean drama? Here is the “Must watch” one!!!

Oh My Ghostess (Hangul: 오 나의 귀신님; RR: O Naui Gwisinnim) is a 2015 South Korean television series starring Jo Jung-suk,Park Bo-young, Kim Seul-gie and Lim Ju-hwan. It airs on tvN on Fridays and Saturdays at 20:30 for 16 episodes beginned July 3, 2015 and finished on August 22, 2015. It is romantic comedy drama about Na Bong-seon who is possessed by a ghost and chef Kang Seon-woo who doesn’t believe in ghosts.

Na Bong-Sun (Park Bo-Young) works as a sous chef. Because of her timid personality and low self-esteem, she doesn’t have any friends. Since she was a child, she has been able to ghosts because of her shaman grandmother. One day, she becomes possessed by seductress ghost Shin Soon-Ae.

Kang Sun-Woo (Cho Jung-Seok) is a star chef. Na Bong-Sun has a secret crush on him. He is good looking and confident as a chef. Even though he is popular with women, he has yet to get over his ex-girlfriend. He begins to notice Na Bong-Sun after her sudden change.

While ‘Oh My Ghostess’ has one last episode left, the leading actress Park Bo-yeong’s photo has been unveiled. On August 20th, tvN’s ‘Oh My Ghostess’ posted on their official Facebook ‘Whoa, this week is the last week for #?”ohmyghostess? No!!!”, along with a photo as well. In the uploaded photo, Park Bo-yeong wearing an apron is standing leaning against a wall of the restaurant. Park Bo-yeong looks cute with her big eyes wide open as if she was surprised. ‘Oh My Ghostess’ will complete on August 22th. Read more at: http://tr.im/o642E

Watch on: Oh my ghost 16 episodes

[KPOP] Psy is coming back!