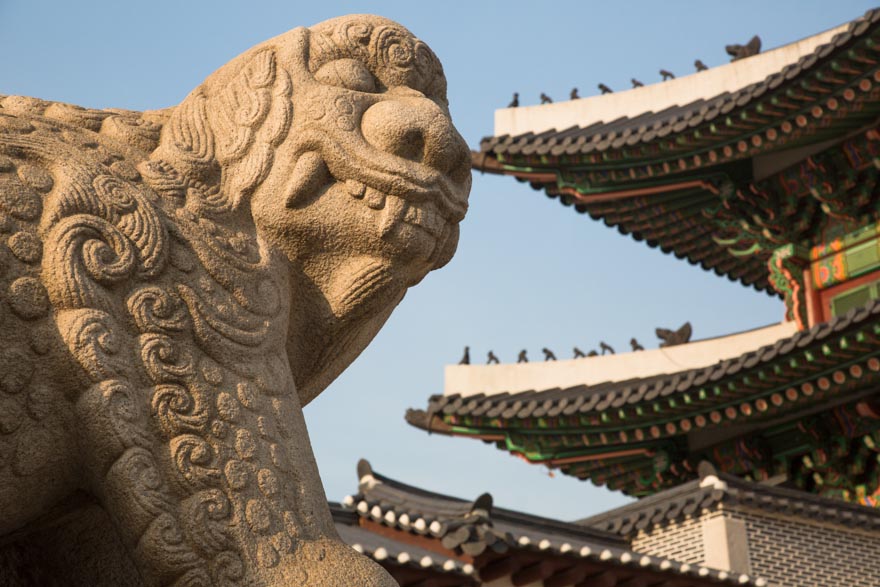 The Xezhi is known as Haetae in Korea. It is called “the Unicorn-lion” or “an omniscient mythical beast” in English.  According to Korean records, Haetae’s body is shaped like a lion that has a horn on its forehead. It has a bell on  the neck, and the body is covered with scales. It lives in the frontier areas of Manchuria. Haechi, generally known as Haetae ,  often appears in myths as a guardian against fire and disasters .  In ancient Korea, Haetae  sculptures were used in architecture during the early Joseon dynasty, as their image was trusted to be able to protect  Hanyang (now Seoul) from natural disasters and to give law and order among the populace.  It can be totally said the Haechi  is a mythical animal with righteous temperament distinguishing good and evil, punishing the wrongdoers, and guarding important monuments from any danger.

The Seoul Metropolitan  wanted the new symbol to become the city’s new icon and contribute to boosting the capital’s international image. The Seoul  Metropolitan  made the selection after six months of preparation, including various surveys and public hearings. Most respondents picked Gyeongbok Palace as a representative icon of the city but they  chose the palace’s guardian Haechi for its practical variations along with its historical characteristics. Therefore,  Seoul Metropolitan  has officially used Haechi (origin of Haetae) as the symbol of Seoul since 2009, like the Big Apple of New York, Merloin of Singarpore and Buddy Bear of Berlin. Haechi has replaced  the city’s old symbol of Wangbomi, a tiger character, which has not been well known due to the lack of promotion as well as its symbolic meanings.

For actively providing the new symbol, The Seoul Metropolitan   has set  other forms of Haechi to install  in the grand places and various spots around  Seoul, included appearing  on  various advertisement of Seoul such as tourism packages name and  tourism accessories ; coin, T-shirt etc.

Let's Have 1-Day Tour in Namyang-ju