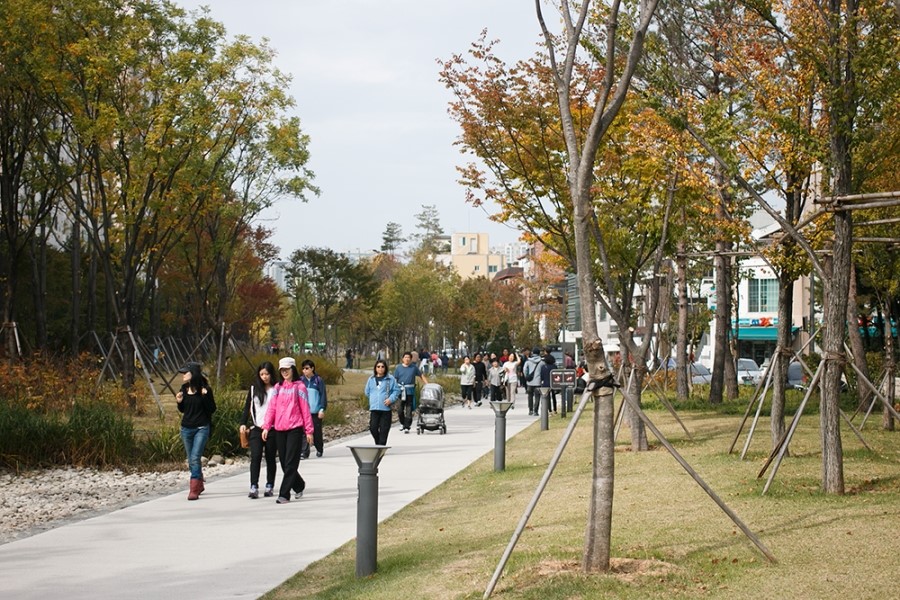 Gyeongui Line Forest Park is a beautiful 6.3km stretch of line that has earned the nickname of “Yeontral Park” amongst Koreans. It is a beautiful re-modeled and reused old railroad line that cuts through Seoul, providing green respite in the middle of the city.

Although the park consists of a long stretch of railroad line, there are 3 distinct parks- Saechanggogae, Waugyo and Yeonnam-dong. However if you google Gyeongui Line Forest Park on google maps, you will get the location for Yeonnam-dong (Yeontral Park) only.

Although this is the most famous area, to get a more accurate perspective of the Seoul’s own Manhattan Highline, it is better to use Naver Map and type “경의선숲길”, which is the name in Korean.

The name Yeontral Park combines the word for the most popular park in Yeonnam-dong with Central Park! It is a beautiful location just outside of Hongik University Station exit 3- the best way is to spend one day traveling up north, and perhaps taking another day to travel down south and really enjoy the Gyeongui Line Forest Park. 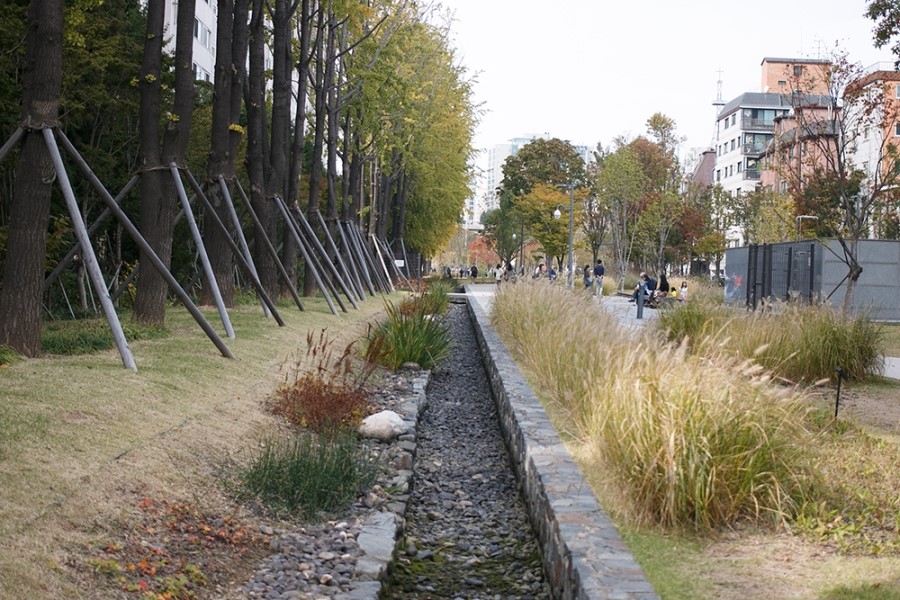 Why is it Gyeongui Line?

Gyeongui is the name of the railway line that used to run through the same path as the park. As a portion of the Gyeongui railway line went underground, it was decided to change the remaining railway ine into a green area for the citizens.

It is very popular particularly in the summer, with many young people (especially in the Yeonnam area) having picnics outside on the grass. Although in Autumn and Winter is it too cold to really enjoy a night out, the careful use of greenery has created an environment that is stunning in all seasons!

The space has been designed for public use and the park is very accessible, and pet friendly. In the evenings, there are many pet owners that use the time to walk their dogs, and both Seoulites and tourists who use it as a place to exercise. 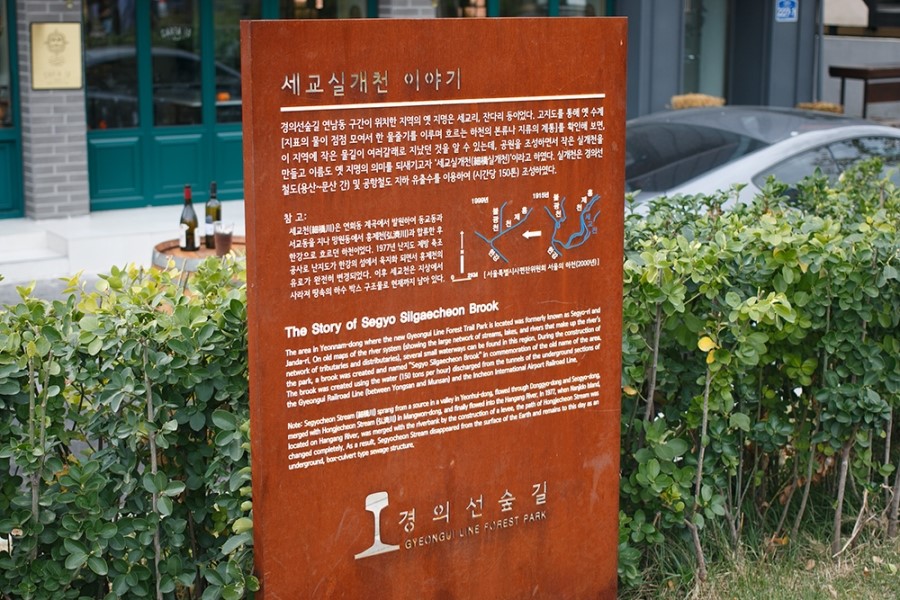 There are alot of itneresting plaques with information published in English and in Korean, making it also an educational place to visit!

Who is Gyengui Line Forest Park For?

Everyone! From locals to tourists, it is a wonderful place to enjoy Seoul history, mix with the locals and get something urban and yet green into your system! Located right in between Hongdae and Sinchon, “Yontreal Park” is also perfect because there is so much to do in the vicinity!

Then why does the park called Yeontral? It is combination of two places, Yeonhui-dong and central park. Just like central park in New York, this park lies on the center of the city with square shape. Real name of this park is Gyeongui Line Forest Park. It was railway before, after the railway moved into underground the place were just bare and devastated field. Under construction, the field changed into beautiful hub of Hongdae. Inside of the park, there are many benches, green grass field, small artificial fond. As the weather gets hot, people sit next to pond and dipping their feet or kids are playing as though they are playing in water park. 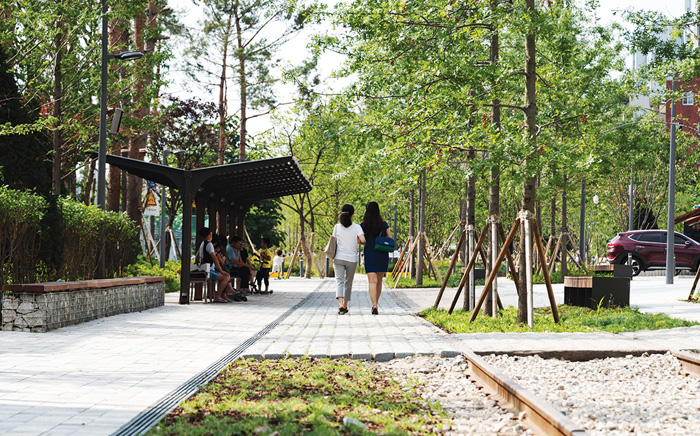 In October the Mapo Ward Office annowed theat they will be building a “Gyeongui Line Book Street” in the area in front of Hongik University subway station.

The new theme street will be located at the book street square of the forest park. Mapo officials said, “As a cultural landmark, the Gyeongui line book street will provide visitors with past, present and future of books in the green space.

The book street has been built given the unique characteristics of the area. About 3,909 publishing and printing companies are concentrated in Mapo, and 1,047 companies among them are operating around the Hongik University area. The high density of book companies in this region contributed to the creation of a 250-meter-long book street from the gate 6 of the Hongik University subway station to the Wow Bridge. 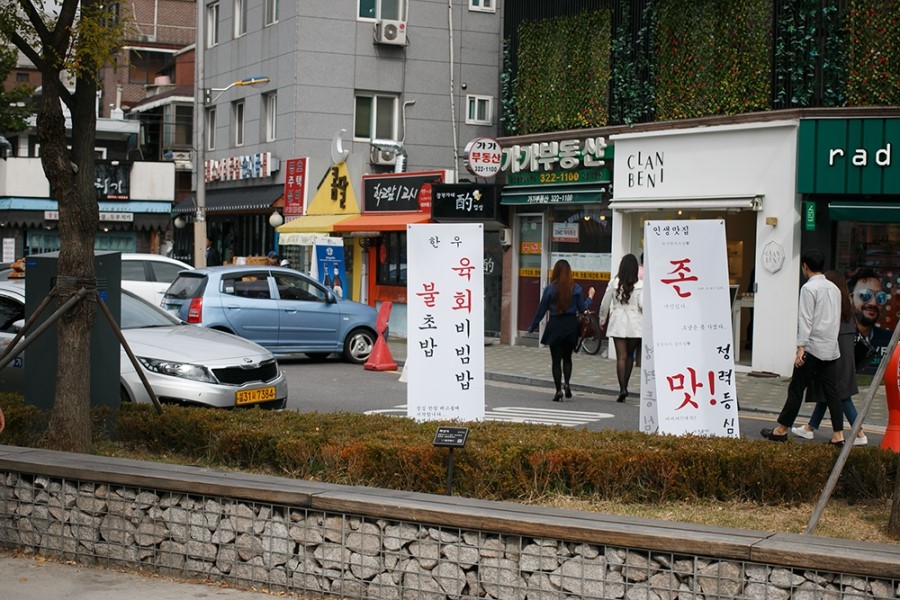