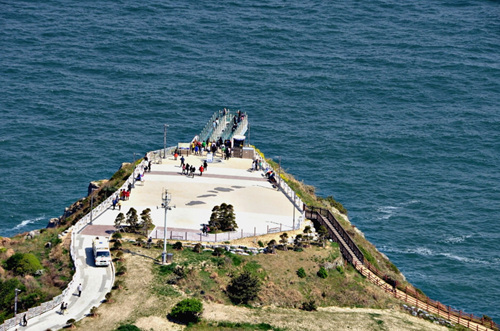 In face the site of Oryukdo Skywalk  formerly called  Seungdumal (승두말), as the shape resembles a saddle, and it was  originally named Jallokgae (잘록개) as well  by residents and women divers.  Oryukdo Skywalk  has firstly started operating in October 2013, after the construction  finished on September 12, 2012,  with a motto of “Walking in the Sky”, and since then, it has been one of Busan’s popular tourist attractions. The construction of Oryukdo Skywalk at the Seungdumal  area, which is regarded as the dividing point between the East Sea and the South Sea.

For its construction, the iron columns were set up over a 35-meter-high coastal cliff, and a 15-meter glass bridge comprised of 24 glass plates and were shaped like a horse’s hoof connecting  the iron columns. The bottom of the glass was specially produced with four attached 12-millimeter glass pieces coated with a bulletproof film that has a thickness of 55.49 millimeters, making the structure quite safe and  the glass protective  from damage.  The visitors  must wear overshoes when entering and the skywalk only allow five people at a time to secure the glass.

Oryukdo Skywalk was built to let more people enjoy Oryukdo with fun and thrill, by installing a transparent floor giving one the sense of flying over the sea, the same as walking in the sky.  Besides  the visitors will be thrilled with the view of the waves while looking down through the transparent floor. The sea stretches out ahead of the skywalk, perfect for open-air shooting on sunny days.

the day in case of rains, and strong wind,

the period during the repairing and improving facility

Facilities: Information on history, ecology, and organisms of Oryukdo Island

How to get the  Oryukdo Skywalk :

Facilities for the Handicapped :

Parking for people with disabilities

Wheelchairs can only access the entrance of the glass bridge.

Pets :  Permitted, but  pet is carried.

HOLLYS COFFEE- All about New Menu