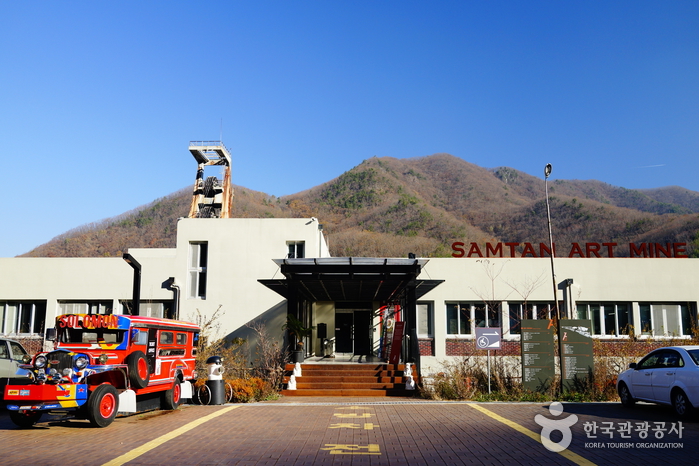 The Abandoned Coal Mine But Lively Art Complex

Samtan Art Mine which was located at the foot of Hambaeksan Mountain, and where used to be the main producing anthracite in the past, transformed an abandoned mine into an art complex, and later becoming the shooting scenes of many TV series and TV games in Korea, including the recent popular TV series, the Descendant of the Sun, which attracted many fans from here and abroad.

Coal Mine was opened in 1964 with the employment of about 3,000 people in the neighborhood due to the more demand of coal wanted, it was closed down in 2001. Different from others abolished coal mines which mostly was left to rust away, but abandoned Samcheok Coal mine has been converted into the impressive art field that highlights modern contemporary arts, and also the exhibition hall for the history of mining in the area.

Apart from artistic works collection and history of mining display, there is a tunnel that used to be the entrance in the mine which maintains a consistent temperature of 12 degrees Celsius throughout the year, so it is now used as a wine cellar for serving the guests of the restaurant in this Art Mine which is becoming popular to all of the guests as it serves quite delicious appetizing meals and also barbecues on the grill. This is the best finale of the tour with tasty food and wine in the tunnel.

Admission and participation fee to Samtan Art Mine are ranging from 10.000 to 13,000 won upon the ages and numbers of the visitors. It is closed every Monday.

Take the intercity bus from Dong Seoul Bus Terminal to Gohan-Sabuk Intercity Bus Terminal, then take the local bus to Samtan Art Mine.